The Future of Mobile Apps: What does Tomorrow Hold in Store? 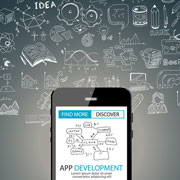 The proliferation of smart phones and tablets has completely changed the way we work and access things on the go. Today, there is a plethora of apps offering diverse functionality. Using such apps one can buy products, purchase different types of services, access internet, play games, get entertained, and much more.

Mobile applications have evolved significantly since their inception, and their popularity as well as their overall acceptance is increasing considerably. With the continuous growth in the popularity of apps and their application in multiple ways, the future of apps will see a great shift in the way the apps are developed and leveraged.

Evolution of Apps and the Future of Mobility

While most apps are majorly made with mass market appeal in mind, there are a few companies who are genuinely reinventing applications and rethinking what next-gen apps would look like along and what functionalities they would serve.

The natural progression of apps will lead them to the enterprise level and as per industry experts the apps will enhance mobility at that particular level. Consecutively, apps will be developed for logistics, for purchasing, for lead generation, for supply chain management, for patient care and much more. In fact, the apps of tomorrow would be like having a virtual assistant by your side. These apps would not only make you more productive but will also share your workload. Here are some of the things to look out for as far as the future of apps is concerned -

Contact us right away to discuss your project requisites!