10 Mobile Texting Apps You need to Know About 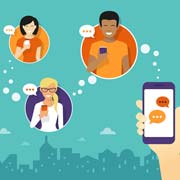 Ever since its inception, text messaging has been a driving force in the field of communication. The first text was probably sent about two decades ago, and ever since then, this communication tool has only seen an upward growth when it comes to public acceptance and ease of use. Almost three-quarters of the world's population today have access to mobile phone and trillions of text messages are sent across the globe every day.

Texting is the most widely used way of communication throughout the world, and is especially popular amongst the younger generations. With communication and information transfer getting faster and faster, the world is getting smaller and smaller. The obsession of people towards social media and texting is therefore changing the face of communication.

10 Top Mobile Texting Apps You Need to Know About

Being a widely used medium of communication today, especially by the younger generation of the world, mobile app development companies always strive to come up with newer, better apps for texting. The main aim is to attract more number of users to their platform due to which there is huge competition in this domain. Here we have compiled a list of the some of the top mobile messaging apps you need to be aware of -

Outsource2india has been in the mobile app development for over a decade and also has been providing a series of other software development services for over 22 years now. Our team of experienced mobile app developers can develop different types of mobile apps including e-commerce, texting apps, social networking apps, grocery and food delivery apps, etc. Our experience of having worked with different clients helps us understand their business models and develop the app accordingly based on their requirement.

If you have any kind of mobile app development requirement, feel free to write to us or talk to one of our representatives and we will be more than happy to help you out with a cost-effective solution.