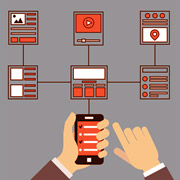 The race to achieve maximum mobile app downloads has intensified in the past few years. So much so, that today, the real difference between an app that sells and one which doesn't is its overall quality, presentation, and an overall bug-free nature. Mobile application testing, therefore, is essential in order to ensure that every mobile app meets functional, compatibility, and usability requirements.

It is important that every mobile app developer employs proven, efficient practices for mobile application testing. If one develops apps for smartphones it is necessary that the app undergoes complete and accurate testing before it is launched into the market, and that the testing is completed under rigorous usage conditions, but within a short time.

In most cases, if your app has any functional irregularities users will immediately stop using it. Whether you are an established company or a first-time developer, this initial impression can severely hamper your future prospects. Here is a list of best practices for successful mobile app testing -

Manual app testing helps testers gain considerable knowledge about the mobile app during the app development phase. Initially, test cases are created manually so that it can be verified later and also to keep record of the scripts which can be used later for automation. Manual testing helps testers to identify the weaker sections and design more test cases for these sections.

As testers become more confident with the manual tests, they move on to the automation of tests. This helps in saving a lot of time and repeating the same test numerous times is an easy task. It maintains the consistency in how the tests are performed and sets a benchmark for further tests to be conducted.

Automated testing of mobile apps comes with a series of benefits. Some of them are listed below -

Speed
Automated tests are undoubtedly very fast in terms of testing mobile apps as compared to manual testing. Due to this speed a lot of time is saved which can be used to conduct further tests or repeat the same tests in different combinations
Repeatability
The same tests can be repeated over and over again by eliminating the errors due to manual intervention. Testers may forget the testing steps, or omit certain steps which can lead to flaws going unnoticed
Reusability
The different automated tests can be used on different platforms and on different versions of the same mobile application even after the UI has been changed by the developers
Cost Reduction
Since the speed of the automation process is very high, the number of resources needed to perform the automation tests is fewer. This results in the reduction of costs to a very large extent

1. Appium: This is an open-source testing tool for cross-platform test automation. It is designed to support any framework and any language that can create a HTTP request. The app code need not be modified and changed to test the app in this tool.

2. Calabash: This is a testing tool which uses two open-source libraries, one for iOS and one for Android. This tool automates mobile testing for native and hybrid mobile apps. The test cases are written in natural language and then run within the framework by translating it into test scripts.

3. MonkeyTalk: This is a completely functional test platform for both iOS and Android and is used by testers as well as mobile app developers. The IDE creates test scripts, and the Agent is the test instrumentation library to which the app links. It uses simple keyword syntax and Ant or Java execution engines and the tests are data-driven from spreadsheets.

4. NativeDriver: This is a popular testing tool which is an implementation of the WebDriver API which drives the user interface of the native application rather than the web application. This tool works with Android, iOS, and Windows mobile apps.

5. SeeTest: This is a test automation tool used to test mobile applications on various platforms such as Android, iOS, Windows, and Blackberry. This tool allows the tester to record the tests on devices and can be used to build cross-platform test automation suites.

At Outsource2india we have a team of highly experienced testing engineers who are equipped with the latest software and tools to take care of your mobile app testing requirements. We provide services to test mobile apps which are developed on any platform. If you have any kind of mobile application testing requirement, feel free to get in touch with us.