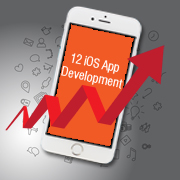 The year 2015 has been an exciting one for all Apple enthusiasts. The year was a busy one for Apple in terms of major product launches and software updates. Starting with the Apple Watch, iPad Pro, Apple Pay, Beats 1, Apple Music, it was followed by Apple's ninth release of the iOS mobile operating system.

The major release of 2015 was the launch of Apple's iPhone 6s and iPhone 6s Plus models.

This launch marked a major boost in the iOS app development market. The sales of iPhones sky-rocketed with Apple selling more than 50% more phones compared to the number they had sold just two years back.

The iPhone market has always indicated a phenomenal growth of about 16% over the years and will continue to do so.

12 iOS App Development Predictions for 2018 and Beyond

The Apple iPhone market has been on the rise and holds great promise even in the future. It is the right time for businesses to develop new mobile apps for the iOS platform and grab the attention of the iPhone users. Here are top 12 iOS app development predictions for 2018 and beyond -

1. Augmented and Virtual Reality: This is the new upcoming trend in the field of mobile apps. With increasing demand for 3D viewing of movies and TV shows, the next big trend will be viewing iOS apps in 3D. Also, the gaming industry will see a major boost in the field of virtual reality, especially in core gaming regions such as India, China, and Japan.

2. Cloud-driven Apps: Cloud technology-driven iPhone apps will continue to dominate the market in 2018. This will allow the iOS app developers to keep the app size small and also users will be able to sync the app with multiple devices due to cloud compatibility.

3. App Data Security: With the number of mobile purchases and payments on the rise, the iOS app security issues will be watched very closely this year. Customers store bank and card details on various iOS apps, so this data need to be completely secure to avoid any misuse. The customers need to be assured that their confidential data is kept safe, and app data security will see some major improvements in 2018.

4. Smart Device Compatibility: With Apple having already launched the iWatch, we can expect many more such devices in this year. The iOS app development team will be creating various other wearable tech apps for healthcare and fitness. These apps will be synced on all platforms and compatible with all devices.

6. NFC Enabled Devices: NFC or near field communication is one of the emerging technologies used for data transfer. With the "touch to pay" option being available increasingly in the market today, the iOS apps coming into the market are expected to be NFC compatible.

7. Internet of Things (IoT): Internet of Things is already gaining popularity among all app developers throughout the world. The idea of controlling various devices without even being physically present is something that is catching everyone's attention. Such iOS apps will be quite in demand in the coming years.

8. Beacon and Location-Based Wi-Fi Services: The distinction between online and offline is diminishing fast due to the beacon technology. Apple is the first company to incorporate this technology into the iOS. Beacon technology and location-based Wi-Fi, will allow OS app developers to create better apps.

9. Force Touch Keyboard: Apple's Force Touch technology, which was recently granted a patent, may soon replace the existing physical switches on keyboards. This new technology uses pressure sensors which gives multiple uses to each key depending upon the amount of pressure applied. The future iOS apps are likely to take this technology into consideration during development.

11. iPhone Subscription: Every year a new variant iPhone is launched making the older versions outdated. In 2018 we might be able to see the launch upgrade program in which people will be able to upgrade to the latest iPhone by paying the same price. This scheme will attract a lot more people and hence result in a lot more customers for the iOS app market.

12. iCloud Voicemail: Apple is rumored to be testing the iCloud Voicemail which could be a very useful feature. The feature would see Siri talking to people who contacted you, and converting their voicemail into text for you to read later. The future iOS app developers may want to use this innovative feature.

What to Expect from iOS in the Future?

Apple has always impressed the world with a variety of products. The future iOS mobile apps will be expected to take care of all the compatibility issues that will occur on different platforms and devices. The iOS watch which was launched in 2015 came out with a second version Apple Watch 2 in 2016, and as per the latest rumors, Apple Watch 3 launched on 22nd September 2017, a year after its series 2 was successfully launched.

Apple TV will gain a huge market share and so will the apps and games being used on it this year. Apple's ambitious driverless iCar project is underway, and may not see the light even in 2018, as its rumored that the fully autonomous car may get launched in 2026!

Take a Bite of the Apple Before Somebody Else Does!

iOS has always been one of the multi-functional platforms with a crystal clear display and high-quality touch interface. It has attracted millions of users across the globe with its high-quality performance.

Our team of highly experienced iOS mobile app developers has the required skills to develop creative and innovative apps and give shape to your ideas. If you have any kind of iOS app development requirement, feel free to get in touch with us.