Hybrid vs. Native Apps - Which Way to Go? 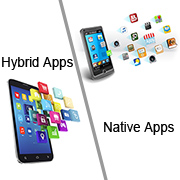 One of the main reasons why people use an app is because of its ease-of-use and simple functionality, combined with a user experience second to none. Nobody has time for a clunky user interface and a bad functionality. In a recent survey, 79 percent of the consumers said that they would retry a mobile app only once or twice if it failed to work for the first time, whereas a measly 16 percent said they would attempt more than twice.

As mobile app development times keep getting shorter and time to market becomes increasingly important, a highly debated question before any mobile app development team is whether to build applications that are directly written on native platforms or use tools like PhoneGap to build hybrid apps. Hybrid apps use native code in conjunction with web languages to gain a set of unique attributes, while taking considerably shorter times to develop. At the same time, native apps, more often than not, provide the best user experience.

Native mobile app development uses native programming languages such as Objective C, Swift, Java, etc. whereas hybrid mobile apps are built using web technologies such as HTML5, CSS, JavaScript and then put into a native container. There are benefits and drawbacks of using each of these technologies and you need to completely analyze the associated risks and business requirements before starting with the app development process.

Native Apps
Hybrid Apps
Code Reusability/ Portability
Native Apps
App Code written for one platform cannot be used for another platform
Hybrid Apps
Most hybrid tools allow portability of a single code-base to multiple mobile platforms
Device Access
Native Apps
Native platform SDKs provide access to all device APIs
Hybrid Apps
Many device APIs can be accessed depending on the tool used, but is still not as well integrated as native apps
UI Consistency
Native Apps
Each native app suits the platform it has been developed for, and comes with familiar, original UI components conforming to the platform's app design guidelines
Hybrid Apps
UI frameworks can fairly achieve a native look, but in most of the cases, feature a common look in order to shorten development periods and save money
Performance
Native Apps
Apps built using a native code have direct access to native functionalities of the device resulting in better performance and UI
Hybrid Apps
For complex apps, the abstraction layers often prevent native-like performance, and therefore hybrid apps tend to perform slower in comparison to native ones
Cost
Native Apps
Very high cost of development, especially if the app is being developed for multiple platforms
Hybrid Apps
Although the cost is lower than native apps, skilled developers proficient with hybrid app tools are still required in order to ensure good app performance
Monetization
Native Apps
More Monetization opportunities exist as these apps can use native ads instead of banner ads, while ensuring charging and payment process is seamless
Hybrid Apps
Monetization opportunities exist but the payment interface tends to be clunky. Also, one needs to shell out a percentage to the app stores while monetizing hybrid apps

Before you finally decide on which development mode to choose for your next app, take a moment to ask yourself the following questions -

Today, native and hybrid apps are becoming common is the enterprise industry. The need for more business-to-employee (B2E) apps is expected to grow exponentially in the coming years. This growth has led to many experts recommending choosing hybrid apps for large scale internal app development while building native apps for external customers with high performance expectations.

While discussing native and hybrid apps, it cannot be denied that native mobile apps are favored by consumers throughout the globe. If we observe the most popular apps around us, we notice that most of them are native. Facebook and LinkedIn both tried building hybrid apps but found that the performance was not up to the mark as compared to native mobile apps. However, these big companies can afford to hire many developers with the skillsets to build native mobile apps for different mobile platforms.

52% of the developers today prefer developing Hybrid Apps, and in the coming years, there will be more hybrid apps on people's devices as compared to native apps. These statistics therefore predict a dramatic shift towards hybrid app development, and it is highly possible that the next app you build might just be a hybrid one, even though you have been contemplating going native. At the same time, there is no one-size-fits-all-solution and you need to choose one over the other on a case-by-case basis.

The choice between native and hybrid app depends on a number of factors including business requirement, developer skills, and development time. It's a good sign for customers that today's app developers are not strictly religious about native, hybrid, or even HTML5 apps. Instead, they choose to focus on the type of development that suits their needs, along with their customers'.