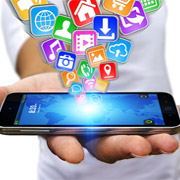 The world is in love with smartphones! With the exceptional growth in on-demand internet access and the ability to perform multiple tasks with ease, these ubiquitous smartphones are now far removed from their humble beginnings as a mobile telephone.

Voice telephony, as we know it, is now just a commodity, as the real money comes through by providing reliable, high-quality entertainment apps and multimedia applications which leverage fast internet speeds (4G and LTE). These apps - varying from instant messaging apps to social networking ones, or even content consumption apps, are now setting the golden standard for connecting billions of smartphone users across the globe.

The Growth of Entertainment and Multimedia Apps for Mobile Phones

The primary driver behind the growth of apps for multimedia and entertainment is the ready availability of high-speed data. The LTE (Long-term Evolution) standard is the fastest growing in the worldwide telecom industry, with more than 1.5 billion global subscribers as of 2015.

In even developing nations such as India, Philippines, etc. 2G and 3G networks are now slowly being phased out in favor of 4G, and the market of cheap, value-for-money smartphones with dual-sim and 4G capabilities is at an all-time high.

As a result, professional and user-generated content (YouTube, Dailymotion, Flickr, Blip.tv) which could only be accessed on the PCs a few years back are now available across multiple devices and phones through mobile apps for multimedia. Entertainment applications such as Netflix and Hulu are now at the forefront of this digital, access-anywhere revolution, with the former now being available in more than 130 countries, allowing consumers instant access to a wide variety of TV shows and movies. There are numerous other applications of multimedia in the entertainment field, some examples of which include -

Entertainment and multimedia apps have many usages across industry verticals. For example, one could use smartphones for learning, online collaboration, as a personal music/video player, for video-on-demand services, watching digital TV, or as an e-book reader. The possibilities are endless, and with the growth of readily available technology, it is limited only to the developer's creativity to create new and exciting apps.

Some common entertainment and multimedia applications include -

At O2I, we have partnered with globally renowned technology developers, content producers and publishing houses to build entertainment apps for both traditional web and mobile platforms for the past several years. In the past few years, we have extended our expertise to developing multimedia apps for smart TVs and other multi-screen entertainment options.