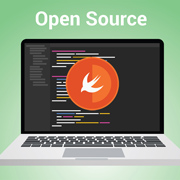 The technology industry is seeing a whole new era of development with major companies open sourcing their programming languages. Apple, one of the world's most prestigious companies, had unveiled Swift in 2014 and it soon became a powerful programming language for developing iOS, OS X, tvOS, and watchOS based applications. In the simplest of terms, Swift is a multi-paradigm, compiled programming language.

On 3 December 2015, Apple announced that Swift would be an open source language. This has indeed made the programming community quite happy as it not only opens up development opportunities for the now-default iOS programming language, but also for running Swift on various other platforms, devices, cloud, and operating systems such as Google Android, Microsoft Windows, Linux, and so on.

Swift is an intuitive and potent programming language that offers developers the liberty and abilities that they require to develop cutting-edge software. The language is simple to use and learn even for beginners. Swift is considered as the first systems programming language that is fun to work on and expressive as a scripting language. Another key feature of Swift is that being a language designed for safety, it automatically eliminates vast categories of common programming errors.

An Open Source Community for the Swift Programming Language

To go ahead with its initiatives, Apple launched an open source community website for the language, wherein the code is shared through the source repository GitHub. The language is licensed under Apache 2.0 open source license, with a runtime library exception. This enables users to seamlessly incorporate Swift into their own programs and port the script to other platforms.

Making Swift opens source also has several other benefits, for e.g. anyone now would be able to download the source code or in-development builds to see what the team is up to. Expert developers who would like to contribute to the development projects can now easily participate through this open source community, file bugs, resolve bugs, offer bug fixes or enhancements, and develop their own programs or apps.

Being Open source, developers get easy access to the following -

The implications of Swift now being open source are huge! Not only is it going to drive faster innovation, rapid adoption, and a whole new user base of developers tinkering with the platform, but will also allow several other advantages, such as -

Swift is the fastest growing iOS open source programming language in the world. At Flatworld, our developers are proficient at providing Swift app development services, as well as Objective-C for high-quality iOS app development. We can leverage the latest features present in iOS SDK to ensure we develop high-quality iPhone and iPad apps at a fraction of the cost as compared to our competitors.

Contact us now to learn more about how we can help your business grow.