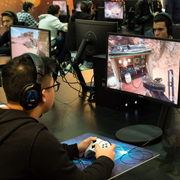 Video games have come a long way since the first games emerged on the scene somewhere in the 1970's. Today, video games are as popular among seniors as they are among kids and teenagers. These games offer photorealistic graphics which simulate reality while allowing gamers to roleplay as their favorite characters. The International gaming industry is now a billion-dollar business, with the U.S video game market itself being valued at 17.68 billion U.S. dollars.

The gaming industry has received a further boost with the help of Mobile Gaming. As mobile phone penetration grows in countries like China and India, the gaming industry keeps breaking records every year. 2016 was the biggest year for games and gaming software, exceeding $3.5 billion in sales, which in turn was driven by record sales in both digital and online game sales, as well as mobile games. Many industry reports suggest that the global games market will touch more than $120 billion in 2018 with mobile gaming accounting for at least 42%.

India, one of the world's fastest-growing economies, is soon becoming a hot destination for the International gaming industry. Rising income levels and growing internet penetration will all help push the Indian gaming industry to $801 million in sales by 2022, up from $543.08 million in 2016!

The Game Development Industry in India

India has more than 70 million gamers spread out across mobile, console, and PC platforms, and has therefore caught the attention of several high-profile International and Indian game developers. Since India has traditionally offered significant cost-competitiveness and skilled workforce for IT development, many game developers are also looking to outsource their key working components to India. This increased production of games will further offer brand new opportunities for game developers, tech teams, and publishers to set up shop in India. Some of the reasons why India is considered as a valuable destination for international gaming include -

By most accounts, the Indian gaming industry is not new and dates back to 1999 when companies such as IndiaGames and Nazara were founded. IndiaGames then went on to be acquired by Walt Disney in a multi-million dollar deal.

While games produced by Western studios such as Subway Surfers and Candy Crush Saga still remain extremely popular because of their easy learning curve and high entertainment value, many Indian-developed games are now catching up. A new age of social and online gaming companies backed by venture capitalists have steadily been cropping up in the Indian scene. Some of the more famous ones include -

The quality of games made by Indian developers have finally hit a global standard, and while there are close to 500 small game studios in the country, this number could rapidly increase as foreign studios decide to outsource or even take over most of these companies to target the Indian audience.

Games are now becoming extremely ambitious in terms of overall quality, presentation, graphics, story and structural realism. While a majority of the world's population is still playing on mobile, the growth in the number of PC and console players who demand higher production value have led to inflated game budgets of $50 million or more.

Game development in India is leveraging this increase in costs to attract international outsourcing by allowing game publishers to save money. Apart from lower costs, game publishers also benefit by hiring Indian game designers and developers for any of the 3 stages of game development, including -

India is becoming a destination for International gaming outsourcing by leveraging the abundance of talent available in programming, designing, and 3D modeling. Working on International titles also allows Indian developers to get exposure and work with the best creative talent across the world.

Game development in India is still in a constant state of flux. Many Indian developers believe that although there is high-quality available in the market, the money is not. Barring a few, most Indian game developers are still under-funded startups hoping to make it big. Some of the major challenges which developers need to overcome include -

The Future of the Indian Gaming Industry

The future of India's game development community looks bright and there is no reason why it cannot become the chosen destination for international gaming industry. The consumer base for games is increasingly growing, especially on mobile, and the right e-commerce solutions are already in place to facilitate micro-transactions and ad revenue. The Indian game app developers will therefore have ample opportunity to innovate, design, and develop compelling game content for both the Indian and global audience.

Growing consumer base and evolving e-commerce system provides the Indian game developers ample opportunity to innovate and create compelling content with social and cultural context, which is key in engaging the Indian consumer. With multiple years of experience in outsourcing, the Indian game development market is now ideal for developing, designing, and QA testing game products with the help of the latest technology and cost-effective services. Some important predictions for future of Indian gaming include -

At O2I, we have more than 23 years of experience in providing exceptional software development and mobile app development services to clients around the globe. We are proficient in both 2D and 3D games development, testing and maintenance, and creating business-centric game apps as per the request of our clients. Contact us right away with your outsourcing requirements.