Are Universal Apps the Key to Windows 10 App Development? 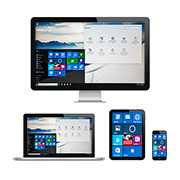 The latest operating system version of Windows 10 is currently installed on about 10% of all Windows devices, and this statistic that has been constantly increasing ever since Windows 10 was launched in the July 2015. Microsoft's concept behind Windows 10 is radical, as they plan to bridge the device gap by supporting "Universal windows apps" that provide a uniform Windows experience across smartphones, PCs, tablets, etc.

What is the Universal Windows Platform?

Popularly known as UWP, this platform-homogenous application architecture was created by Microsoft mainly to develop modern UI apps that would be compatible with Windows 10 on desktop as well as mobile without the need to be re-written separately for each of them. It supports Windows application development using languages such as C++, VB.NET, C#, or XAML.

The Universal apps you can find in the Windows Store are pretty new, and not all of them are as powerful as their traditional counterparts. However, universal Windows 10 apps have quite a few advantages, including the ones mentioned below -

1. UWP apps work well with built-in media controls: Windows 10 has improved the way its on-screen media controls work. Any time you try to adjust the volume or use a media button, you will see an overlay pop-up that shows what is playing.

3. Windows Interfaces support touch input by default: Most Windows devices were not touch enabled earlier. But with Windows 10, the whole operating system and the UWP apps built for it support touch by default. Windows 10 apps are more appreciated by users on devices which have a touch interface.

4. Better aesthetics: Windows 10 is a much better looking operating system as compared to its predecessors. The UWP apps built for Windows 10 keep UI front and center while following Microsoft's modern UI design guidelines, thereby providing a better user experience as compared to older versions of Windows.

5. Enterprise centric apps: Windows 10 is has been hailed as the next Windows 7, which is currently used by more than 70% of the businesses worldwide, and provides exclusive business-ready features that range from productivity to data security. Enterprise UWP apps built for Windows 10 will benefit from better security features, as well as leverage their availability on multiple platforms to provide a streamlined business experience.

6. Continuum feature of Windows 10: This is one of the signature features of Windows 10 where the user interface of an app can automatically adjust irrespective of the device or location. The main aim is to continue the computing experience regardless of the device used. Windows phones which support the continuum feature can be plugged to a monitor, and instantly be recognized as a PC operating system, allowing you to open UWP apps and use them wherever you are.

Universal Apps Are the Key to Windows App Development

The launch of Windows 10 by Microsoft is an honest attempt to create a universal Windows experience and a brand new, customer-friendly ecosystem. Windows 10 versions for computers, tablets, and phones are closely linked to each other and Microsoft is making it incredibly easy for developers to code and develop apps for the same. Some of the reasons why UWP apps are key to Windows app development -

Outsource2india has been in the Windows mobile app development business for about a decade now. We have a highly-qualified team of mobile app developers who have the required experience of serving clients around the globe for both big-budget and small scale projects. Some of the projects we have carried out for our clients can be seen here.