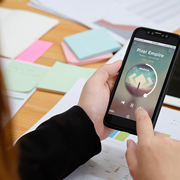 The customer is a family run company in the US, comprising of a father and son who are tech-savvy and smart entrepreneurs to boot. The duo was looking to shake up the social music environment.

Our team of mobile app developers had to face a few challenges during the project. They were -

This was a research-intensive project, but our team of developers at Outsource2india got down to it right away. After a lot of brainstorming, they successfully developed an app that could perform the functions the customer wanted.

This innovative app enables users to turn into DJs and have a blast at parties, rather than paying big money to hire DJs. It is easy to use, and super fun too; what's more, it allows users to always play exactly those songs that are their favorites.