Is React Native the End of Native Development? 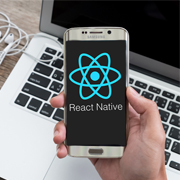 Mobile apps have traditionally been developed as native apps or hybrid apps. While native apps are built from the ground up keeping an OS such as iOS and Android in mind, hybrid apps are much easier to develop especially for multiple Operating Systems using HTML5, CSS, and JavaScript. Hybrid apps have come a long way overcoming several development challenges on the way. At the cutting-edge of this technology and a poster-child for a new generation of developers is, the React Native user interface (UI) design framework.

What is React Native?

In the simplest of terms, React can be considered a JavaScript library for building user interfaces, and has proven to be tremendously successful, especially under the auspices of Facebook, who have now open sourced it. React has powered everything from Facebook and Netflix, and with React Native, this technology is now embracing the mobile platform by allowing developers to create native-looking and functioning iOS and Android apps.

Today, several developers view React Native as a one-stop-solution to writing and deploying applications they see fit while speeding up the entire development process, as React Native apps do not have to be written separately for different mobile operating systems. This, therefore, also gives them better dividends than Native development. React Native allows developers to only focus on the view portion of their applications, writing small pieces of code which describe how the application should look based on user input, thereby saving them a considerable amount of time and resources. By designing simple views for each stage of the application, React will ensure that it renders and updates only those components which change with user input at that particular time.

6 Reasons Why You Should Choose React Native

React Native development initially faced quite a bit of apprehension from the developer community since it combined both HTML and JavaScript. But in time, successful mobile apps launched using this technology have changed the overall perception. Some of the various benefits of React Native include -

Xamarin vs React Native: How Do They Stack Up

When it comes to developing native-like hybrid applications, there really are two main competitors in the market right now, React Native and Xamarin. The latter, which has now been acquired by Microsoft and is included with all versions of Visual Studio is developer's favorite as it allows them to develop apps for multiple platforms using C#.

React Native on the other hand is extremely suited to the modern-day demand of "develop once, deploy twice" strategy and runs on the lean legs of JavaScript. Using Xamarin, you can only write the kind of code which ape native coding, and include similar interface design tools, similar calls, etc. On the other hand, React Native's approach towards application coding is completely different, and relies on JS code, CSS stylesheets, and HTML tags which are then implemented within JSX transforms using the Babel JS Compiler. This makes React Native work much more seamlessly as compared to Xamarin.

Pros and Cons of React Native

There are many reasons why React Native is fast gaining importance in many areas of mobile application development. At the same time, is it actually the hybrid app savior that many are making it up to be? Let us have a look -

Will React Native Herald the End of Native Development?

React Native has proven its usefulness when it comes to developing hybrid apps within a short span of time, especially if it is for apps developed for one-shot events such as conferences, concerts, meetings, etc. At the same time, many apps which need constant updates without having to trouble the user with frequent downloads also fit the target market for React.

At the same time, this platform is still in its infancy and is being heavily developed upon. As a result, if you are looking for stability and maturity from your platform of choice, it's better to window shop elsewhere. In short, React Native is not yet ready for primetime, but with the pace of development that this platform is seeing, we won't have to wait long before everyone around us starts using it.

At O2I, we have been at the forefront of mobile app development outsourcing for more than 23 years now. Whether it is Native app development, iOS app development, Xamarin App Development, or developing fast, future ready HTML5 apps, we have worked with clients across verticals helping them unlock the potential of a new user base.