5 Livestreaming Apps to Change the Way the World Consumes Content 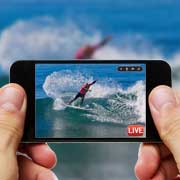 As the quality of consumer-oriented devices and data connectivity improves, the usage of social apps which allow users to remain connected and view real-time information is seeing a large spurt of growth. Livestreaming apps today are a prime example of how sharing, connectedness, and immediacy can create a potent combination of factors which stand to disrupt content consumption.

Today, people are using live video streaming to take part and witness events as and when they happen, whether it is a star-studded music concert, or the latest breaking news. As low-bandwidth videos become more prevalent, and as virtual reality devices find more takers, live video in 2018 promises immediate gratification and an immersive way for people to share, view, and create content.

The latest trends in live video streaming in 2018 include quite a few sectors which have seen gradual adoption, including gaming and news media. Watching people play games isn't just popular, but is literally blowing away the roofs while bringing in exponential dividends for companies such as Twitch, which was recently acquired by Amazon. Let us have a look at some of the most popular apps which have contributed to the significant rise of live streaming -

Live Streaming for Businesses in 2018 and Beyond: What to Expect from the Future?

There are many scenarios where live video streaming can help countless people involved, and although we are seeing a rapid increase in the popularity of such apps, there is still a while to go before most of the inherent benefits of this technology are realized. In the future, we can see live streaming become a part of -

Choose Outsource2india for All Your Live Video Streaming App Requirements

Live video and audio footages are gradually taking off and are engaging new users on a rapid scale. With the help of a live streaming app, your business can not only tap into an avid user base, but also allow you to get in touch with new clients and customers on a more personal basis.

O2I has been in the field of software development for the past 23 years, and with our experience in mobile app development, you can get access to the best live stream technology for your app while incorporating features that you require. Contact us right away and learn more about our offerings!